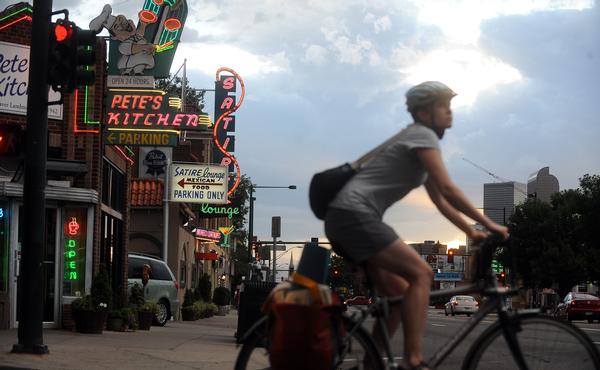 Colfax Avenue stretches 26.5 miles from the far Eastern end of the Denver metro area to the start of the foothills in the West. It is the longest commercial street in the United States, but it is so much more.

Since Denver was founded in 1850, Colfax Avenue has been part of the rich fabric of the city. It originally was a major thoroughfare for miners looking for riches in the Rocky Mountains. Today, those riches can be found at the U.S. Mint along Colfax, which strikes over ten billion coins every year and houses the biggest collection of gold bars outside of Fort Knox.

Colfax is the proud home to the powerful leaders who shape the future of the state inside the Colorado State Capital, at Colfax and Broadway. Just outside the capital, those less fortunate spend their days and nights along Colfax hoping to find a meal and place to sleep.
East Colfax is home to three prominent live music venues within 1.5 miles of each other. The Fillmore Auditorium, the Ogden, and the Bluebird Theater offer intimate settings with eclectic acoustics. Some of the most well known musicians of the last century have performed on these stages and countless more will continue to do so for years to come.

For 40 years, Casa Bonita on West Colfax has been serving up Mexican food and wholesome entertainment with an indoor 30-foot waterfall and daring cliff divers. Even if you don’t like Mexican food, it’s a must-do at least once in your lifetime.

Colfax has long been known for its access to prostitution and drugs. In fact, at one point it had one of the highest rates of prostitution arrests in the city. Meanwhile, legal, yet promiscuous, activities remain to be a draw at The Diamond Cabaret gentlemen’s club along Colfax. Colfax still exudes its original grit and character that will continue into the future. Even its namesake knew this over a century ago.

Colfax Avenue was named after Schuyler Colfax, a powerful Indiana congressman, Speaker of the House of Representatives, and Vice President of the United States under Ulysses S. Grant. Schuyler’s vision of Colfax in his 1878 autobiography still holds true today: “And that thoroughfare, born beneath the mountainous mountains of rocky peaks so high, seeing as it shall victual to prospectors, explorers, and men of chance, and whereas said men, in their sparse moments of recess and requiescence, require relief of an immediate and carnal conformation, let Colfax Way be a den of avarice, a cauldron of covetousness, a peccadillo wharf in a sea-storm of morality. Let not a man walk Colfax Way and wonder, ‘Where shall I deposit my virility this eve, where may I encounter mine intoxicant?’ for he shall find all he seeks on Colfax. Curse these vexatious rickets!”

Agency Zero is proud to call East Colfax Avenue home. What is normal on Colfax is perceived as crazy, chaotic, uncomfortable or odd by most. We enjoy the characters that are giving away cats, singing songs, protesting, or carrying on conversations with anyone who will listen. This is a unique place and we don’t want it to change. If you’re ever enjoying a drink at the Irish Snug, look up, we are starting epidemics right above you.